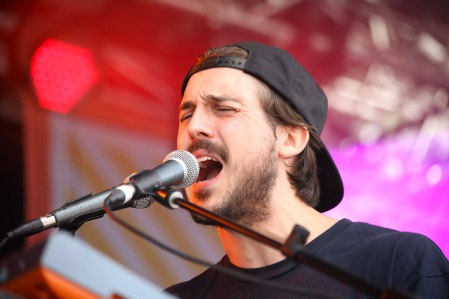 Like Michael Stipe, Justin Bieber or even Andrew Stockdale, Andy is the kind of guy that you can track periodically by hairstyle. We first met during a foppish mop-top phase, still going strong from his debut album We’re Too Young. He more or less denies the thing exists anymore, but it’s actually a wonderful collection of songs; if a little naive. Adds to the charm, see. Anyway, these days he rocks a very slick quiff and messes about with synthesizers more than the ol’ piyannah.

What hasn’t changed is how I feel about the man himself – a smart, charming and bold songwriter that I’ve seen go from strength to strength. I’ve seen this guy so many times that I probably know the words to some of his songs better than he does. Seriously, I may well be the leading authority on Andy Bull – I don’t know whether that’s a career path or not, but it’s something. Along the way, he’s introduced new musicians into the mix who have also become good friends, including Alex “Best Dude” Bennison and the similarly-quiffed/stylish Dave Jenkins, Jr. He’s also given me enough musical memories to last a lifetime. He’s a gift that keeps on giving.