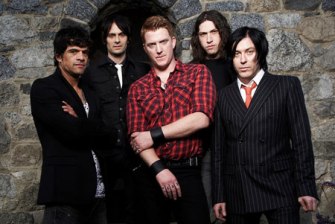 Don’t you just love it when Australian hip-hop brings the funk? The lads who gave us “Unemployed” find themselves with a brand new job as professional party-starters- and hilarious video makers (you have not properly experienced this song if you have not seen the video).

Another fabulous number from Favourite Worst Nightmare. The harmonies featured here are quite possibly the best on any Monkeys recording, and the guitar and lyrics are, as always, exceptional. Best line: “I want to sleep in a city that never wakes up…but Dorothy was right, though.”

There’s something strangely enticing about this band and their music, and I think it lies predominantly with Paul Smith. His catchy hooks and his brilliant lyrics help define the band’s personality, and here is no exception. On this track, Paul deals with desperations and his both his interpersonal and intra personal struggles. A true standout of the magnificent Our Earthly Pleasures.

77. The John Butler Trio – Better Than

Surprisingly for a JBT song, there is not a guitar in sight here. Butler, instead, opt for a banjo, and creates one of the poppiest and catchiest songs the band has ever done in the process. The instrumentation is bright and layered, and the lyrics give out a positive and thoughtful message: “Life’s not about what’s better than.” Check out the Little Richard reference in the lyrics, too.

My favourite Canadian lesbians served up one hell of a record in 2007, and with it came one hell of a title track. Taking cues from everyone from The Killers to Kate Bush, this track is one of many examples on The Con of the sisters’ old style given a new twist.

Another amazing tune from Our Earthly Pleasures. I find something interesting about this song every time I listen to it – it’s a very engaging little number, especially the big-arse chorus. The mix of both calm/intense contrast and heart-on-sleeve emotion is also a winner.

The first of a few Bloc Party tunes to make it in to the list. The best thing about this song, much like many of its brothers and sisters on the album, is that it makes you feel so ALIVE. It makes you feel so wide-eyed and in awe of everything. It’s a truly great thing to experience. On this track, Kele talks about his life and suggests we drive to Brighton for the weekend. He’s made me an offer I can’t refuse…

The drum intro pounds and the Arctic ones blaze into my countdown yet again with a song that just exudes cool without even trying. Bonus points for the tripped-out guitar break, courtesy of the amazing Alex Turner.

72. James Blunt – One of the Brightest Stars

A mix of Don Henley songwriting, Bee Gees harmonies and Reveal-era R.E.M. It might sound odd on paper, but this song is a complete and total winner. None of that annoying whine that was ever-present on “You’re Beautiful” and other rubbish Blunt songs is here, either – an easy bonus 10 points.

Not since the days of the band’s self titled album have I been so excited about a Used song. Everything about this song, from the manic guitar hook to the wild vocal performance, right down to the horn section, is exactly what “In Love and Death” was lacking. To find such a vast improvement of a previous record all in one track is an exceptional feat, but Paralyzed pulled it off. Such a pity the album as a whole wasn’t as good as this.

Further proof that Radiohead are rarely, if ever, at musical fault- especially when they’re making the music that they want to make as free agents. This is a beautiful number, probably my favourite song on the In Rainbows record. It has a spaced out, almost cinematic vibe that is a nice progressive statement of the album as a whole. Thom Yorke, again, fits the song perfectly.

On a fairly disappointing record (Our Love to Admire), this song stood out head and shoulders above its counterparts on the album. Another infectious hook, Paul Banks showcasing his Ian Curtis/Michael Stipe lovechild vocals, is what made this song the Amercian summertime alt-anthem that it was. Worth checking out, too, is the video- you always pick up something new upon every viewing.

Fewer musicians this year released music that was just plain lovely as Mr. Josh Pyke. Finally dropping his debut album in Memories and Dust, this gorgeous little love note was a highlight for its simple instrumentation and perfect vocal harmonies. Something Ben Lee could have done if his latest album didn’t suck so much.

Obviously not the best song of 2007, but my god it was one of the weirdest. Whurrs and buzzes bring in the song along with the best non-sequitur of the year (“Bonefish”? “Boneface”?). While all this is happening, we somehow find the song itself in the middle of a ridiculously catchy 6/8 stomp that was, basically, a skullfuck to anyone who has never experienced experimental music. Confused? Scared? Wait until you hear Strawberry Jam. Animal Collective are just getting started.

System of a Down are one of my all-time favourite bands, so it was going to be very hard for anything Serj Tankian released on his debut solo album, Elect the Dead, to not make my list. This track, the second single, stood out for me in particular – its soft-loud contrast in the verses and chorus, the multi-layered vocals of the bridge and the excellent video clip, creating excellent metaphors and drawing very clever parallels between the war and child’s play.

Josh Pyke is an excellent lyricist, despite occasionally becoming prolix. This flaw is proudly presented on his behalf in this song. But somehow, he makes it work on this song – a fast-paced and catchy tune that also showcases Josh’s love of vocal range- from the high-pitched “ahhhhh”s to the lower key bridge. If Josh keeps making songs like these to go on albums like Memories and Dust, he could well become the next Paul Kelly.

The Jimmy boys came back in a big way in 2007 with the excellent Chase This Light. You can argue if you like, but to me there were very remote few better opening tracks in 2007 than this. The urgency of the guitar, the anthemic guitar and the completely soaring chorus with Jim Atkins the driving force- to put it simply, they haven’t sounded this big or this great since Clarity.

63. Editors – Smokers Outside the Hospital Doors

If “The Back Room” saw English darlings Editors playing clubs and small venues, then “An End Has A Start” should have seen the band bound for the stadiums- at least, so the confidence and soundscapes found on the record would have you believe. This isn’t a bad thing, of course- the production was excellent and this song, in particular, saw the band better themselves completely.

One of the defining riffs of 2007 comes from this, another cut from Bloc Party’s amazing second record. While Lissack melts his fretboard, Kele preaches to all who will listen about a daunting future of Britain, torn apart completely by terrorism and racism. If you needed any reason why Kele Okereke is an amazing songwriter, then it can most certainly be found here.

Dark, sexy, confident, brooding- only one rock song had the winning combination of all four of these characteristics in 2007, and it was, unsurprisingly, Josh Homme and co. Massive guitar chug kept the backbone of the song, while everything else from random synth bleeps to Julian Casablancas was thrown in for good measure.