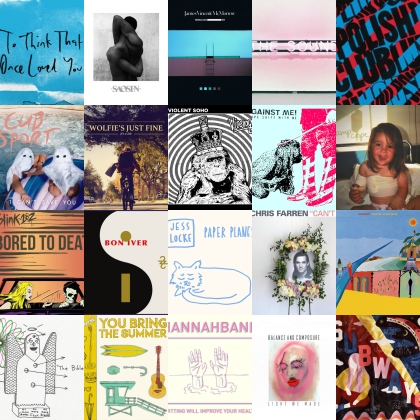 Top 40 hits! We’re almost done, so make sure you’re caught up on parts one through three by clicking on those words. You’re home and hosed after that – let’s crack on, shall we?

40. The Drones – To Think That I Once Loved You

A few years ago, The Drones and Harmony went out on tour together and covered a Leonard Cohen number at the end of their shows. “Once Loved” feels, in its own way, like a continuation of that. It’s a waltz to the end that the late Cohen would have approved of, the vocalists of Harmony filling out the song’s misery the way the singers of “Famous Blue Raincoat” do. As the organ hums into a funeral dirge and the proto drum machine hypnotically clicks away, the band impressively show off their umpteenth route to reinvention and reanimation. Sincerely, G. Liddiard.

The reunion of Anthony Green with Saosin felt more like closure than anything. After unceremoniously leaving the fold a decade and change prior, a drug-addled loose cannon at the time, Green returned as one of post-hardcore’s most celebrated vocalists – clean and sober, yet still with one of the most distinctive and dynamic voices the genre has to offer. “The Silver String” was the centrepiece and crowning achievement of the band’s comeback LP – a brilliant balance between the band’s burning belligerence and blackened beauty. A most unexpected of second winds, but unquestionably a most welcome one.

In one of the more interesting trajectories of recent memory, James Vincent McMorrow quickly reworked his hirsute nu-folk leanings into stylish, synth-heavy slow jams. With his third LP, We Move, McMorrow did just that once again; adding some brighter pop sensibilities into the mix while still latching onto a firm stamp of identity. “Rising Water” brimmed and bubbled under an incessant beat and chugging bass, eventually toppling over into an irresistible chorus with just enough soul to keep a grip on McMorrow’s human touch. Perhaps the tide will turn again on album four? Who’s to say. For now, there’s this.

It’s safe to say not many people could have anticipated one of the biggest, shiniest hits to come out of British pop in 2016 would have had the touchstones of artists like The Human League, Eurythmics or the Pet Shop Boys. How could a style long considered to be so distinctly on the nose come back in such a grandiose fashion? Leave it to The 1975 of all people – the uber-cool English outfit took on the revival with both hands on the steering wheel; cruising their own yellow brick road in pursuit of the purest of pop ecstasy. Fabulous.

Sydney duo Polish Club are always in a hurry. There’s a fever-pitch urgency to practically all of their songs, their delivery coming with a pained sense of conviction. Whatever the twosome have to say, you’re gonna hear them – right now. “My House” comes at you with the speed of a freight-train. The guitar sparks against the steel of the rails, while the rush of drums clatters into formation in a manner that shouldn’t make nearly as much sense as they do. There’s barely time for the dust to settle before Polish Club are onto the next one. Keep up.

It’s interesting to note that Cub Sport, despite being in a relative stage of infancy, are already in a third act of sorts. Originally making indie chamber-pop as Tim Nelson and The Cub Scouts, the music took more of a bright, tropical turn when they became Cub Scouts. Now, as Cub Sport, the Brisbane quartet are more assertive and confident than ever before, allowing for the hooks to subtly sink in under cover of darkness as one is drawn to the bouncy synth towers like a moth to the light. As sophisticated pop tunes go, Cub Sport are currently untouchable.

In the video for “It’s a Job,” Jon LaJoie is nowhere to be seen. Instead, we follow a young boy on a fantastical adventure of monsters and wild things. It’s a visual metaphor of sorts for Wolfie’s Just Fine as a whole. Forget what you know about LaJoie’s previous endeavours – just imagine for a moment. What you’ll get in return is a lush, gentle folk voyage; bristling with new life and rustic, joyous harmonies. The whisper of the jazz brushes fall lightly against the intrinsic guitar patterns, and Wolfie’s Just Fine stakes its claim as LaJoie’s most worthwhile venture.

Using the template of Interpol’s 2004 single “Evil” mixed with the dynamic payoff from the Pixies’ classic “Monkey Gone to Heaven,” Violent Soho carved out yet another piece of unfathomably catchy and teeth-gnashing guitar pop. If the song’s Kim Deal-worthy bass line doesn’t immediately get its claws into you, a trademark Soho “YEAHHHHHHH” will finish the job. 2016 saw the Mansfield quartet ascend to greater heights than ever thought possible, playing massive shows and scoring a couple of ARIAs for their troubles. It was choice cuts such as these from their WACO LP that made their further rise a certainty.

After the intense emotional weight of 2014’s Transgender Dysphoria Blues, who’d have ever called that Against Me! would arrive back on the scene with perhaps the year’s defining power-pop number? Taking its cues from the likes of The Cars and Cheap Trick – heck, even “Jessie’s Girl” gets a look in – Laura Jane Grace and co. are having the time of their lives on “Crash.” Not just in the song’s hilariously lo-fi video, but in the song’s twisting and shouting backbeat and glam-tinged guitars. Just when you think you know all of the answers, Against Me! change the questions.

For those that didn’t get in on the ground level with the band’s 2015 demo single “Stove Lighter,” it was “Done” that served as their formal introduction into the world of Camp Cope. It’s a song that immediately sets down the foundations of the trio – the poetic imagery, the urgent strums, the fence-swinging drums and those quintissential bass riffs. With it came what any self-respecting Australian music fan would have put in their top five side one, track ones of the year. It bursts to life, screeches to a halt and and then springs immediately back into action – magic.

Most were unsure what to make of the first official recording released by blink-182 since the departure of alien-truther Tom DeLonge. ome sloppy live performances and its midlife-crisis music video didn’t help matters. So, how did “Bored to Death” song endure? Simple – removing its elephant in the room in order to clear space for the earworms. Accepting the song as a slick, robust operation in combat-ready radio rock allows for its greater attributes to reveal themselves. It gets to the point where one doesn’t even need to have a history with blink-182 in order to appreciate its developmental excellence.

It takes over a minute before even the notion of a guitar appears on the opening number to Bon Iver’s divisive, difficult third album. Vernon’s voice is glitchy, warped, looped and turned into an instrument of its own. It’s cold and uncompromising in its approach, but therein also lies why “22” works. It stops you dead in your tracks upon your first listen – its glacial pace and stunning reveal serving as one of the year’s more arresting musical experiences. Bonus points: “22”’s single version, which allows for the ambience to linger just that little bit longer to full effect.

She may have received a bit of wider attention in 2016 through Triple J Unearthed and touring with The Smith Street Band, but anyone who’d paid attention prior knew it was well overdue. After two seachanges – first from the central coast to Sydney, and from there to Melbourne – Locke has finally found her place as one of the country’s most earnest and engaging songwriters. Tracks such as these are a clear showcase of her knack for simple, effective guitar parts and melodies that instantly roll off the tongue and take their place at the back of one’s mind.

A serial tweeter and a Snapchat king, Chris Farren can go joke for joke with the very best. Even the title of his solo album from this year – Can’t Die – felt like a knowing wink; a punchline. In the midst of that album’s runtime, however, Pagliacci broke down in the doctor’s office. Despite its sunny overtones and big chorus, “Say U Want Me” has a fairly busted-up and lovelorn interior. Whether he cracks you up or you just want to give him a hug, it’s in your best interest to get Chris Farren into your life right away.

No longer Tumblr’s best-kept secret, English grunge kids Basement made a considerable step forward in 2016 with the release of their third – and easily best – album, Promise Everything. “Aquasun” arrived as the third single, and immediately made its presence felt. Its refrain was all of three simple words – “dive into me” – that some how managed to say more than a picture that paints a thousand. Its conviction and delivery nodded both to their emo-tinged past and their alt-rock present; resulting in a balance beautifully struck and a greater potential realised at the top of their game.

With a rejigged line-up and a slimmed-down new name, the band formerly known as Andrew Jackson Jihad kicked off the next chapter of their career in style. With “Goodbye, Oh Goodbye,” the folk-punks delivered one of their most urgent and infectious singles yet. Like The Decemberists after binging on Weezer, this clattering and sneering number threw all of the band’s defining traits at the wall – not just to see what would stick, but to create some sort of Rorschach test for newcomers. The deal was sealed with perhaps not only the greatest video of 2016, but of all time.

24. The Monkees – You Bring the Summer

XTC’s Andy Partridge used to only make plans for Nigel. This year, however, he made plans for Mickey and Peter as well – and the combination worked so well, it leaves you genuinely wondering why the connection had not been made sooner. This pure ray of sunshine was guaranteed to raise a smile every time it played out – which, if you were one of the few that paid close attention to the band’s Good Times! LP, was often. Throw in some double claps and a joyous outro and you have the magic of the Monkees recaptured in high definition.

In retrospect, it was good – great, even – for Balance and Composure’s comeback single of sorts to immediately begin with the sound of a thudding, early-model drum machine. It immediately cleared the scene of snapback-toting demo kids still hoping for a shot-for-shot remake of I Just Want to Be Pure. The Pennsylvanian quintet never needed them around, anyway – as “Postcard” so explicitly testifies, they had far bigger fish to fry. A left-field indie-emo hybrid with dark undertones and cleverly arranged beds of guitar, the song locks you into its spiralling dystopia and simply refuses to break its hold.

There’s moments listening to Wildflower in which it feels like one is on an ever-continuing journey – a tunnel leads through to to another room through to somewhere else entirely. As “Subways” begins, we’re drawn underground into the darkness and into uncertainty. We surface for air in a technicolour dream-world – a roller disco to end all roller discos, with strings that immediately recall “Love is in the Air” and a children’s choir that immediately recalls “Gettin’ Jiggy with It.” A moment of joy incarnate in a year where we needed more of those than we could have ever anticipated.

Like what you’re hearing? Check out the full Spotify playlist of the DJY100 right here: