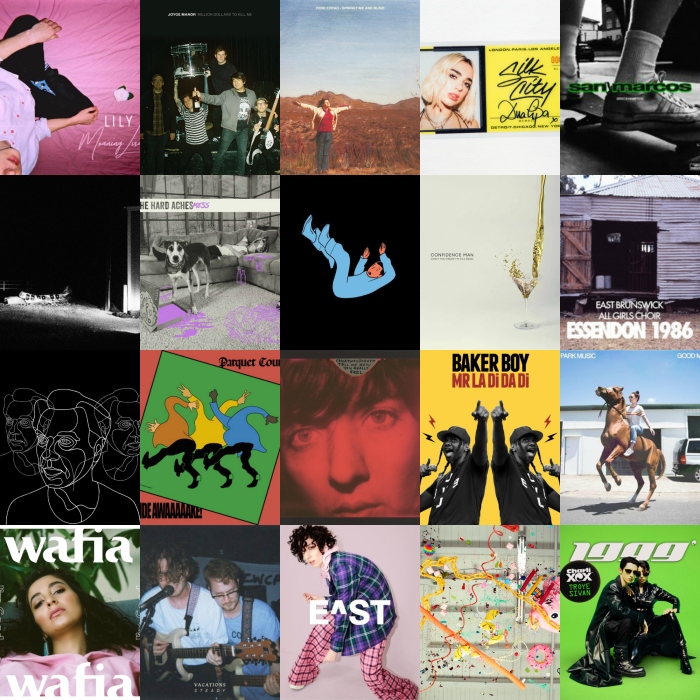 Hey, reader! Make sure you’re all caught up with the first 20 songs by clicking here. They’re good, I promise – and, wouldn’t you know it, these ones are even better!

Moaning Lisa’s second EP, Do You Know Enough?, is the audio equivalent of four seasons in one day. When “Lily” rolls around, the storm is settling in and things are taking a turn for the worse. A considerable stylistic departure for the Canberra natives, “Lily” is a slow-motion lucid dream in which a private universe crumbles and drifts into the abyss. Anchored by picked-out bass and beds of guitar feedback, the song subtly sweeps and builds to what may be the single most devastating lyric of the year: “Now I have nothing left for you to take.” Welcome to heartbreak.

79. Joyce Manor – Think I’m Still in Love with You

When Joyce Manor dropped Cody back in 2016, the cool kids gave them a bunch of shit for it. Pitchfork said it sounded like Everclear – like that was a bad thing! Still, it must have gotten to them in one way or another – their fifth album, Million Dollars to Kill Me, is even poppier than last time. Hell, this track from it in particular sounds like a lost Cheap Trick single, all tight harmonies and chugging major chords. Forget leaning in – Joyce Manor have gone completely head over heels here. Fitting when you think about it, really.

A lot of hardcore kids never got over Have Heart breaking up, and fair enough too. Consider this, though: Have Heart died to so that Fiddlehead could live. There is an urgency and vitality to what this supergroup of sorts are doing, packing short and punchy songs full of throat-tearing hooks and emotive lyrical pleas straight from the heart. Of all the tracks that compose their debut LP, “Lay Low” is the pick of the litter. It comes out swinging from its opening chords and refuses to relent until you’ve felt everything there is to feel. The sun has risen.

There are two mayors in Silk City – super-producers Diplo and Mark Ronson. As it turns out, this town is big enough for the two of them – and just as well, considering they’ve also invited a friend in rule-setting pop sensation Dua Lipa. Her high-energy joy matches up perfectly with Ronson’s retro piano stabs and Diplo’s insistent handclaps, leading to a chorus that would be envied by anyone from HAIM to Miley and back again. This is house music on such a mammoth scale that it’s bound to wake up the neighbours. And if they don’t like it? IDGAF.

If you’re angling BROCKHAMPTON as a boy-band, then “SAN MARCOS” is the ballad performed on the B-stage in the arena, sitting on stools. That’s figuratively what they did when they performed this centrepiece of their fourth album for Like a Version on their eventful Australian tour – which, coincidentally, is also where the music video was filmed. It’s one of the group’s most heartfelt, introspective songs to date, showcasing both a maturity and a vulnerability within their creative spectrum. There may not be a more resonant refrain from the year passed than “I want more out of life than this.”

“Leave Him Now” is a song about a troubled straight relationship in which the female party is advised to remove herself from it. The twist is: That’s it. Dylan Baldi is not putting himself forward as the substitute. This isn’t a “drop the zero and get with the hero” scenario. This is about a genuine concern for a woman’s wellbeing and stability. It takes a trope of songwriting across multiple genres and decades and subsequently turns it on its head. If that wasn’t enough, it’s also one of the catchiest songs Baldi and co. have ever written. How about that.

Here’s what you need to know: “Mess” is the first song on the album Mess. The word “mess” is the fourth word you hear on the entire album, and it’s repeated over a dozen times throughout. It’s a unifying theme for an album that’s ostensibly about everything falling apart. Lest we forget, this is not a new place for them – existentially, at least. They’ve been here before and they’ll be here again. So, they sing over big chords and swinging drums: “We’re not burning out.” It’s defiant. It’s purposeful. It’s resolute. Truth be told, they’ve never been more believable.

Basement have found themselves associated with a few different movements and scenes, such is the versatile nature of their music. They’re flagged for emo-revivalists while simultaneously being added to pop-punk playlists. What a song like “Stigmata” showcases, however, is what they’re capable of at their crux: An alternative rock band. A damn fine one, too. A callback to when it was a good thing to be. A time of Jerry Cantrell harmonies, Pixies dynamics and snares that hit like they’re being played next to your eardrum. The genre is unquestionably in good hands – even with gaping holes in them.

How did a semi-anonymous disco band fronted by a classic pervert and a Lolita become one of Australia’s biggest live acts? It’s all in the name: Confidence Man put themselves forward and danced like there was no-one watching, and kept doing so even as those watching amassed into thousands. NPR’s Bob Boilen once described them as “perfectly goofy,” and there’s truth to that – but it’s not the whole story. A song like “Band” is an acute takedown of the rockstar lifestyle, while also serving up a better chorus than any wannabe could dream of. They have confidence in them.

It’s funny that East Brunswick’s debut album was called Seven Drummers – when “Essendon 1986” kicks off in earnest, that’s exactly what it sounds like. Jen Sholakis is the central focus of this spiralling, seething number, her toms rumbling the earth beneath her as her bandmates carve into their respective stringed instruments. The band has never sounded this dark, this aggressive or this forthright – and it’s this immediate shift that ends up paying off to create their finest singular moment to date. A fading, sepia portrayal of restless outward Australia that, truthfully, couldn’t have come from any other band.

The erstwhile Talking Heads frontman was behind one of the year’s most critically-acclaimed and beloved live tours, bringing a barefoot ensemble of untethered musicians onto stages across the world with a celebratory, career-spanning setlist. The tour took place on the back of what surprisingly ended up being one of the year’s more overlooked LPs in American Utopia, Byrne’s first proper solo endeavour in years. “House” was its lead single, and is filled with a classic sense of Byrnian paranoia and unease while simultaneously peppering in a sizzling horn section and head-voice, Sampha-assisted melodies. Long may the grand Byrne spectacle continue.

“Is anybody sleepy?” a voice sarcastically quips before the gang vocals of “Wide Awake”’s second verse boldly answer back with the titular phrase. This sardonic easter egg is a reflection on Parquet Courts as a whole – they do what they do primarily with a knowing wink, playing up their surrounds while also maintaining a deadpan. “Wide Awake” is one of their most uncharacteristic songs to date – a percussive funk procession with double-dutch chants and a literal layer of bells & whistles. They even scored “fluke indie hit” bingo by playing the damn thing on Ellen – go figure.

Courtney Barnett can turn on a dime – or a 20-cent piece, depending on what part of the world she’s touring in at the time. Take the huge chorus of Tell Me How You Really Feel‘s rocking final single as a prime example: Figuratively seconds after singing the phrase “Everything’s amazing” in three-part harmony, she delivers one of the year’s most brutal lines in “So subservient/I make myself sick.” It’s so subtle that you don’t even notice the first listen, but by the time you do you’re looking at a far bigger picture. Here, Barnett is seeking a deeper connection.

It doesn’t get much more wholesome, family-friendly and generally PG than Brisbane’s Ball Park Music. Not to say they’re bland or uninspired, mind you – just good clean fun. What happens, then, when they promptly go off the rails? Vocalist Sam Cromack is a man possessed on this single from the band’s fifth album, propelled by an atonal keyboard blip and a persistent breakbeat as he goes around chopping body parts off. It’s easily the band’s most gruesome and dissonant song to date – and yet, in classic Ball Park fashion, it’s a certified festival killer. Everybody do the chop-chop!

For a few years, break-up songs well and truly got Adele’d. They were all saccharine, mopey and downright depressing – a cheap imitation of “Someone Like You” done by, well, someone like her. With “I’m Good,” we’re making an earnest return to the celebratory end of a shitty relationship – it basically sounds like the audio equivalent of walking away from an explosion without looking at it. The song drips with effortless cool – its wafting synth bass and four-on-the-floor strut give it a “Stayin’ Alive” swagger, while Wafia herself breathily kisses off her shitty ex. “I’m Good”? Damn right.

True to their name, Vacations sound like they’re playing live and direct from where you want to be – which is pretty funny when you find out they’re from Newcastle. All joking aside, the quartet are locked square into the tone-zone – summery guitar reverb, warm bass, roomy drums and some lush harmonies to boot. “Steady” might be the song where they most singularly nail it across the board – a bashful, honest love song filled with hazy chord inversions and an instantly-memorable refrain. Indie didn’t get a whole lot more charming in 2018 than Vacations – Australian or otherwise.

Melisa Bester isn’t the kind to mince words. Hell, she named her EP Life Ain’t Always Roses, which is about as blunt and unapologetic a phrase as you can get. “Imagination” from said EP is surrounded by – ahem – flowery production and slinky rnb melodies. The lyrics, dissecting an impervious relationship dichotomy, still manage to cut through across a slim three-minute runtime. That – and, by extension, the song itself – deserves considerable credit. Pop fans were once told to go west – either by kings or boys. Now, the future is female – and the future is E^ST.

Among the issues Australia has faced since The Presets last put out an album are human rights crises facing asylum seekers and the swift closure of pubs and venues across Sydney. On “Downtown,” Julian Hamilton and Kim Moyes decided to kill two birds with one stone (sorry, PETA) by addressing both head-on in a parade of slap-bass, pogo-bounce grooves and skittish electronics. The titular phrase is an obvious allusion to the restricted nightlife of Sydney, but the refrain is chanted by St. Paul’s Lutheran Church Choir – which is primarily made up of African immigrants. Consider the man stuck to.

“Does anyone remember how we did it back then?” asks Charli XCX halfway through “1999,” seemingly to no-one in particular. Hey, Charli, do you? Lest we forget our heroine was all but seven years old in the titular year – and her sidekick for this song turned four. It’s a gripe, sure, but it’s a small con up against a long, long list of pros. Among those are Oscar Holter’s throwback beat, the hammered-home chorus and what ended up being one of the year’s best music videos. They mightn’t actually remember 1999, but they’ve made sure we’ll never forget “1999.”

That’s it for now! You can stream all 40 songs so far via the Spotify playlist below: