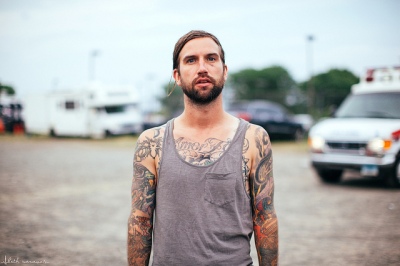 Got to have a cheeky double-dip in this interview, as I was speaking with the devilishly handsome Keith Buckley about both the impending Every Time I Die record as well as his side-project at the time, The Damned Things. It was a good time to be a fan of Keith in Australia, as he toured both at the same time as a part of that whole Counter-Revolution clusterfuck. He’s a great interviewee and a lovely guy. ETID just came through town last month and they crushed, as per usual. I also got to speak to Keith again when Ex-Lives came out, but we’ll cross that bridge when we get to it.

In the last eighteen months or so, Keith Buckley has been leading a double life – for the first time in his career, he’s lent his voice-box to two different bands. On one side of the coin, he’s been hard at work with Every Time I Die, the southern-fried hardcore rockers of which he is a founding member, working on a follow-up to their highly-acclaimed fifth album New Junk Aesthetic. “We are in the studio at this very moment,” Buckley himself confirms over the line from California. “This is my last interview, and then I have to go and record the vocals.” The as-yet-untitled record is projected for a late 2011/early 2012 release, and Buckley is already considerably enthusiastic about the sound of it.

“This is our first record with our new drummer,” he comments. Founding member Mike Novak left the group in 2009, and has since been replaced by new skin-pounder Ryan Leger. Buckley goes on about the energy of the new material – “It’s got so much more energy than our previous records – we’re really excited about it!” Interestingly enough, however, he’s reluctant to give the usual spiel about how it’s “the best record I’ve ever worked on.” It’s nothing personal – it’s just how many musicians like to drum up interest about the new material. So where does Buckley stand? Does he honestly feel the new record is going to be their best?

“The thing is,” he replies, “is that it’s not just another Every Time I Die record. Our old drummer was with us from day one. Everything you’ve ever heard of us being recorded, that’s been the rhythm section. So this is a completely new drumming style – it’s a new sound; it’s a new energy. So, when we’re looking at everything that we’ve ever done and then comparing it to the way we sound now? This is definitely some of the best stuff we’ve written. And it’s all thanks to our new drummer – he’s made us see it all in such a new way.”

Of course, let’s not forget about what else Buckley has been up to in this aforementioned double life. Teaming up with some unlikely pals from thrash metallers Anthrax and pop-punk stadium-fillers Fall Out Boy, Buckley spent most of 2010 and a part of 2011 fronting The Damned Things. The supergroup was a passion project for the five members to make some good-time rock & roll with a hair-metal and hard-rock edge to it. After three or four years in the pipeline – “You know what it’s like with our schedules,” says Buckley – the band finally released their debut album, Ironiclast, in December of last year. Although Keith maintains that he’s “not the type to get too finnicky in the studio,” it was notably different when it came to recording Ironiclast.

“I was singing,” explains Buckley, who had never previously done “clean” vocals on a record before, “and I wasn’t fully aware of what I was capable of with my voice. I was finding out things that I could and couldn’t do, just experimenting with them. It was a challenge, because I wasn’t comfortable. It wasn’t like I had to invent a willingness to do it – I didn’t have to pretend that I like rock music. It was just something that I’ve always liked but have never had a chance to do. I was pushing myself physically with what I was doing with my voice, but it was never like I didn’t like the musical style – I just had to take a different approach to it.”

It should be pointed out at this stage that it was never going to be a case of Buckley leaving his band in favour of The Damned Things – although that didn’t stop a myriad of worried fans approaching Keith while he toured Ironiclast. “Everyone worries about it,” he says, “because nobody every thinks to ask outright. I have never, ever said that I wanted to tone down Every Time I Die. I never said I wanted to leave or anything like that, y’know? It was just another opportunity to write and make music, which is what I like doing. So I did it!”

A simple enough reason, certainly. But here comes the challenge – for the first time ever, Buckley will be bringing both aspects of his double life on tour at the same time. “Yep,” says Keith with a laugh, “I’m gonna be workin’ two shifts in Australia.” While both bands were scheduled to be a part of the doomed Soundwave Revolution, both The Damned Things and Every Time I Die will still get their chance to perform in the country; the former as a part f the Counter-Revolution festivals and the latter doing their own set of headlining club shows. “It’s gonna be quite different to what I’m used to,” Keith says of performing with both bands. “Normally, I just get set into the one style and run with it – but this time I’ll be going between the two. I’m not sure how it’s all going to turn out, but I sure can’t wait to find out!” Likewise, buddy.

“This ain’t my first rodeo!” Actually, this was – I’ve interviewed members of Every Time I Die four times, and this was the first of those. I’m pretty sure it was Keith Buckley who answered the questions. This was for the Boys of Summer tour – remember when that was a thing? Another emailer; this was pretty sweet as I was just getting into these guys. I finally got to see them live in 2013; and their headliner ended up being one of the best shows of the year. Now, on with the show.

Welcome back to Australia! Have you been looking forward to coming back?
We absolutely have, especially because where I live there’s about four feet of snow on the ground. Now I’m out here sitting pool-side. When I go home, I’m gonna be the cats pyjamas! But we also love being here because the shows are amazing. Everyone is super nice to us. Sometimes aggressively nice. That’s sometimes a bad thing, but it’s rare.

Looking back on 2009, what were some of your favourite moments?
I got married, which was pretty monumental. It was a good year for us. We’ve been touring a lot on the newest record and did our first legit headliner for Epitaph. The reception was better than we could have hoped for.

My little brother has fond memories of Keith getting nailed by bottles at Sydney’s 2009 Soundwave. Did this kind of stuff happen at every stop?
I tried to encourage it as much as possible. We want to make the people watching us feel like they’re a part of the show. Since the stage was so big and we really weren’t close to them, I wanted them to come to us. It kept me on my toes too. I’m a lot faster than anything thinks.

You must be upset that Trap Them are no longer on the bill?
I am indeed. I’m an enormous fan of that band.

What do you think of the other acts you are playing with on the Boys of Summer tour?
I think they’re all really cool. They have a lot of support from the kids coming out so it adds a great element. They’re familiar to people. The guys are super nice too.

Many bands speak of how gruelling touring schedules can be. Has that ever been a difficulty in the ETID camp?
No man, it’s just a part of the job. You know what you’re getting into when you sign up. Well, at least you did years ago. If people complain, it’s because they put their music on the internet and got signed before even playing a real show. Either it took them by surprise or they’re just spoiled and didn’t realise that the instruments they bought with daddy’s money didn’t come with a ‘Get Out Of Jail Free’ card and they’d have to suffer for their art.

What have recent set-lists consisted of? Is there even a slight chance of playing at least one Burial Plot track?
There is ZERO chance of a BPBW song. Haha. It’s a good mix, about four songs from each record.

Can you tell us any more about what’s happening with The Damned Things?
I just did some demo/pre-production right before leaving for Australia. Things are coming out splendidly. A lot of solos; a lot of huge choruses. My dad heard a song and said it sounded like Foreigner. That’s a real good thing.