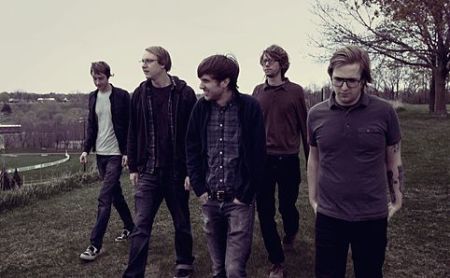 Here’s one that slipped through the cracks from my time writing for Hysteria. I have been a La Dispute fan ever since their debut Australian tour back in 2009. I gotta say, it’s a remarkable transition to go from playing abandoned houses and rehearsal studios to the Corner and the Metro. I’m glad I got to see it all go down. This feature is okay – I think Jordan was still getting used to the idea of people talking to him about his band, and I think I was still getting used to the idea of talking to people about their bands. Call it a work in progress!

As an album, Wildlife is the type of release that feels wholly satisfying – and that has almost as much to do with the context as it does the album itself. The album in the wake left after 2008’s Somewhere at the Bottom Between Vega and Altair, its particularly fiery take on emotive post-hardcore resonating with audiences worldwide. As excellent as Somewhere was, however, it simply couldn’t tide over the band’s more eager fans – a new album was needed to quench their thirst.

“Yeah, it’s been nearly three years since the last record,” says Dreyer, calling from California in the midst of the band’s seemingly endless touring life. “We’ve been keeping occupied with some smaller releases in that time – we did another Here, Hear. EP and we did a split with our good friends in Touche Amore. This last year or so, though, has just been spent piecing the record together. We planned ahead and put a lot of thought into how it would sound – and we honestly couldn’t be prouder of how it’s turned out.”

Although Dreyer feels that Somewhere and Wildlife are quite different records to one another, he is also aware that the comparisons between the two are inevitable. When it’s suggest that there is more of a linear concept to Wildlife than there was on their debut, Jordan notes that particular train of thought is on the right track. “We definitely had an idea of what we wanted it to sound like and what we wanted it to be about,” he said. “It’s important to us to create something that is very much an album experience, something that you can listen to from start to finish. We didn’t want that to be the only way that you listened to it, though – we really wanted to make sure that each track had its own individual merits, too. Essentially, we wanted Wildlife to be something perceived both as a whole and by the sum of its parts.”

In this regard, it’s safe to say that La Dispute have succeeded. As well as containing some of the best songs the group have ever written – the devastating “King Park,” the unbridled aggression of “Harder Harmonies” and the bare-bones honesty found in “a Letter” – it flows with a very smart sense of cohesion and connectivity. It’s quite safe to say that Wildlife is the band’s crowning achievement, with a sound that not only expands from the foundations laid on Somewhere at the Bottom, but also expands into new musical territory previously untouched.

“We weren’t exactly looking for a specific sound,” says Dreyer on the songwriting process of Wildlife. “It certainly required us to cover a lot of different areas, because of the lyrical nature of the songs. We never sat down and specifically said that we were going to write a heavier record or a softer record or whatever. More than anything, we just found what we were writing and recording was a natural progression from what we had done in the years previous. A lot’s happened in that time, y’know, and we’ve all experienced a lot of things – it just felt like we were bringing everything that we had learned to the table this time around.”

As with any La Dispute release, the album has a strong lyrical focus. With a myriad of literary influences (see the Here, Hear. experimental EPs for proof of this), the songs bring its listeners into a deeply personal and often quite dark area of the characters’ lives; and this is arguably more prominent on Wildlife than there has been on any other of the band’s releases. “A lot of the songs on Somewhere were about other people,” says Dreyer, who is the band’s sole lyricist.

“It was kind of my first proper attempt at conveying my ideas of storytelling. I feel that’s definitely progressed on this record – I felt as though I really needed to step up and convey a more personal perspective on what has happened to other people. There were a couple of interactions that I’ve had with people these last few years that ended up being turned into songs. I felt it was important that their story was told, but also that my viewpoint on their story was conveyed as well.”

Although nothing from Wildlife was previewed when the band toured in January of this year, the quintet were still able to effortlessly hang the Sold Out sign on several of their tour dates; once again engaging a cult craze with many fans travelling to a series of shows or even the entire tour. “That was pretty incredible,” says Dreyer with an incredulous laugh. “I mean, the shows were a bit bigger than last time, and we made a lot of new friends – and we got to see a lot of people from the first time around, too. That was really special – Australia is always so good to us, and we just can’t believe our luck sometimes.”